About the Gulf of Maine 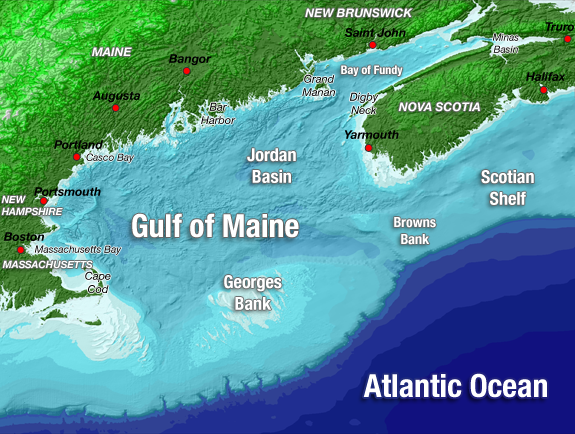 A Sea within a Sea

The Gulf of Maine is a one of the world’s most dynamic environments. Nourished by cold ocean waters and characterized by a complex geomorphology made up of deep basins and shallow banks, this sea semi-enclosed sea is one of the most biologically productive marine ecosystems. Spanning 36,000 square miles (93,240 km2) of water, the Gulf of Maine is characterized by powerful tides which mix the influx of North Atlantic waters with fresh waters from 60 rivers which drain a large watershed spanning much of the provinces of Nova Scotia and New Brunswick and the states of Maine, New Hampshire and Massachusetts which border its coast.

Over 3,000 marine species and birds call the Gulf of Maine home. Coastal marshes and estuaries serve as nurseries and feeding grounds for fish, crabs, and shellfish, and abundant plankton provide the base of a rich food web all the way up to large fish, seals and whales. The Gulf of Maine provides a sanctuary for more than 30 species at risk, including the roseate tern and the critically endangered North Atlantic right whale.

The Gulf of Maine In-depth

The Gulf of Maine is bordered by Massachusetts, New Hampshire, Maine, New Brunswick, and Nova Scotia. It covers 93,000 square kilometers (36,000 square miles) of ocean and has 12,000 kilometers (7,500 miles) of coastline.

Gulf of Maine Council on the Marine Environment Home